1.According to Krukowski, what is noise? What is a signal? Why are these distinctions important? Noise means all the sound around us from the smallest to the loudest, even if we are not paying attention to it is considered noise, instead a signal is a sound that stands out from the rest and that our mind focuses, we pay attention to that well we are interested. It is important because even though the two are picked up by our ears, the noise is often overlooked by our mind to focus on the signal we want to hear.
2. What central idea about noise does this episode convey? Why is it significant This episode is about noise and signal. It highlights that it is important to know their difference and because one is more listened to than the other in the sense that the listener pays attention to that type of sound. In a recording studio, you play with the sounds and reduce the noise that prevents the signal from being picked up by the listener and thus obtain a clear message without having to be bothered by external noise.
3.How does this episode relate to other episodes?

It is related to the other episodes because it shows parts of the music production in the recording studio and how it interacts on digital platforms since each episode was intended to analyze how new technology changes the way we see music in different aspects that each episode covered. .

1.According to Krukowski, what are the main differences between a microphone and a cellphone and why is this difference important?

Krukowski says that the sound in cell phones is different because their microphones pick up the sound but the phone does not transmit the same sound as it reduces unnecessary sounds such as external noise or breathing, that is why he says that our voice has lost feeling through the cell phone. I change in a microphone all the details of our voice are captured allowing us to give some kind of feeling to what we are saying, an example when singing artists approach or move away from the microphone to create depth to what they are singing and this creates in the I publish confidence with what they are listening to.

2. What do Krukowski and Gary Tomlinson, the professor he interviews, assert about the “musical” qualities of the voice and how are these changed by digital transmission?

He affirms that when digitally transmitted our voice loses non-verbal qualities and the musical quality of our voice changes, in the same way the feelings that are transmitted in the voice are not encoded and the feelings of the message are lost.

3. What is the significance of Krukowski’s comments on the voice to ideas about community and interpersonal connection?

4. Krukowski begins by discussing the issue of music file sharing. What is your opinion of this issue? Should music be freely available or should one have to pay?

I think that music should not be free unless the author wants it, because the work that is needed to produce a recording must be recognized, also music transmits emotions and creates feelings being great works of art by the artist must have a price just to hear it.

5. How does this episode represent the relationships between music, community, and culture?

It shows the relationship that exists between each one of them and the advantages that technology has, but it also shows us how the emotions of our voice are not transmitted by digital coding, despite this, it has allowed us to unite communities and strengthen the culture that each one It represents

I chose this video because it demonstrates in some way the manipulation of digital time and the importance of sound, in this case they are artists who make sounds for movies, looking at the screen all the time, the producers play with the recording time, they move it second by second to be able to have the correct sounds for filming. Sound allows the mind to relate what we hear to our memories to that sound.

According to the video, art is not only found in museums, and it is not necessary to be an expert to know how to analyze it and understand the artist’s work, art is found in everything around us, but you need to be an observer because that is An important point to recognize the art also in the video presents the idea that you need a moment of patience and look at the work and think about what the artist wanted to convey with his work. The art then helps us to be more observant to the details, work and intention that the artist produces, through our experiences we can further develop these skills and practice them more naturally.

For this blog post I would like you to use the material about prewriting and writing opening paragraphs and do the following:

Planning Based on Audience and Purpose

Identifying the target audience and purpose of an essay is a critical part of planning the structure and techniques that are best to use. It’s important to consider the following:

It has the purpose of educating the reader by showing the problem that Kiana went through when writing an essay, shows in details that she needed more help, also explains how she felt when writing and presents as a solution not to focus only on the first draft but rather to do a prewriting job.

Students who need help writing their essays, those who suffer that after a paragraph they have nothing more to say.

As mentioned above, students or people who like to write but do not have enough knowledge to develop their ideas and translate them into a well-executed essay and varied vocabulary.

Knows the causes of a poorly conducted essay and what is needed to correct those errors and improve the development of a essay.

In these types of essays, a neutral language not so sophisticated is required so that the reader can easily understand the message.

In the article , “Praising Effort or Performance?”, the author states that electronic devices are a distraction for students. She says scores in school are not enough to achieve success. Also, parents should change the way they perceive raising kids to succeed in life. In addition, the author states that it’s better encourage children’s effort and teach them life skills. Instead of encourage their academic performance. I agree with the author because academy success prepares you for the test, but life skills prepares you for life. 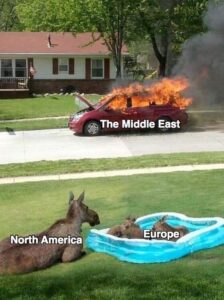 The image performs the work because it is related to the text of the image, it presents two different situations such as the situation of countries at war or internal conflicts represented in this case by the burning house (Middle East) and on the other hand the Animals across the street relaxed and looking represent the United States and Europe, countries better positioned economically and in good condition. It is a genuine way of presenting these problems of great magnitude and in a way the observer relates it and understands the message that is clear and precise.

Logic, clarity, precision .These are the three standards that the Why Art Matters video shows, in the video they clearly indicate examples of art and how images communicate ideas, art being a way of expressing a message.
I think the narrator also uses logic to imply that art is not only found in exclusive places such as museums but rather is in our day to day, in the neighborhood in which we live, the buildings that surround us and our environment usually.
In the same way, another narrator highlights the precision of the definition of art and knowing how to notice it is the most important thing to appreciate and understand the message.

In summary, the video says that art is everywhere, you need precision to notice it but also time to stop and look at the details of what you are seeing, recognize the artist’s work and understand the message that he transmits with his work.