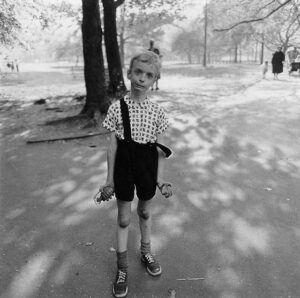 The image inserted above is Child with toy hand grenade in central park by Diane Arbus (1962). I learned that at first glance you notice the child’s facial expression and how instead of posing as a playful and angelic boy he is captured in an intense and frustrating moment. The entire image creates this twisted innocence where you have this beautiful little boy who exemplifies rage and nerves. In his right hand he is holding a very realistic looking toy grenade, while his left is clenched into a claw. Nothing is medically wrong with the boy, but his momentary reaction to the event of being photographed has come to be more than a portrait. The child embodies awkward tensions between childhood games, not-so-childlike violence, and greater turmoil that defined the late 1960s and early 1970s, a time when there was a war. Arbus sought to expose the underbelly of society, which is often overlooked or ignored. What becomes apparent is the more insistent, larger narrative of American sensibility, lost in the  1960s.  I admire Diane so much for this photograph because she created a series based on this one boy of him smiling and playing in the park and out of an array of options she chooses the most thought provoking one. Berger in his first episode talks about how reproductions of an artwork can be forms of information, explaining how its meaning can be modified without intention. Imagining Diane Arbus’ photograph being publicized throughout New York city, there had to be so many differences in opinion and perspective. Critic Susan Sontag wrote about Arbus in her book stating that she pictured people who are repulsive, pathetic, and pitiful. But despite this review it still remained one of one of the most iconic and impactful of its time.