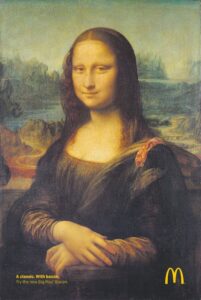 In one of the ad campaigns of McDonald for their Big Mac, they placed a bacon over the shoulder of Mona Lisa (the most famous painting) to promote their Big Mac Bacon sandwich as a “classic but with a bacon” slogan. This image in itself didn’t portray any sort of conflict in the eyes of unsuspecting people but created a displeasure to the people with knowledge of original painting of Mona Lisa. We may agree or not, but our habits and conventions played a role in interpreting ambiguous view on this manipulated image too. Before the invention of camera, our perception is limited to the place and time the original painting is in front of our eyes. Our ways of seeing would be conditioned by its authenticity and uniqueness at that time and place. Berger described that images are a word that we can talk with it and connect it us to our experiences as we wish. This ad did exactly what it is supposed to do. Anybody who has seen this image now knows about the Big Mac Bacon sandwich of McDonald. The image is used in an ingenious way to appear attractive to the eyes of viewers. The meaning has changed from its original, but it served their purpose. Had they used a less renowned figure; the coverage would have been far less.