An image I saw online was really funny and they used it to advertise to some spaghetti sauce. 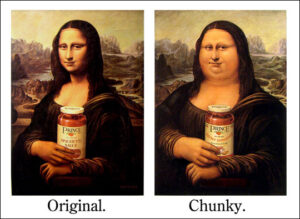 The Mona Lisa by the Italian artist Leonardo da Vinci. this image is what Berger spoke about in his video about manipulating arts. as we can in the image above they used the technology to advertise spaghetti sauce. This is an ad for Prince’s Spaghetti Sauce.  One half shows Mona Lisa holding a jar of the sauce and underneath reads “Original.”  The other half is a heavier version of Mona holding the same jar of sauce, but underneath it reads “Chunky.” here in this image we see how the meaning of the original painting has changed by using technology so, it fit what Berger mentioned in using arts for another purpose so the original meaning has changed and a new meaning replace it.

I think this add worked well for the spaghetti company even though I see it so funny. This add attracts the audience to see what they have done to ous famous Mona Lisa.

2 thoughts on “the chunky Mona”