Question 1:  Berger mentions that, “Naked is to be oneself and to be nude is to be seen naked by others and yet not recognized for oneself”.  When he says this he means that through western art, women who are nude are objectified by an audience and is seen as a beacon of pleasure to her male viewers. Versus being naked, which to Berger means to be  without clothing, but the woman can be more herself without spectators. These differences are significant because the woman’s facial expression is changed to lure in viewers as nude forms. Paintings such as the Jewel Case painting by Guillaume Seignac  is the perfect example, because the woman’s face is contorted in a way of saying look at me or come here. (Image insert below) 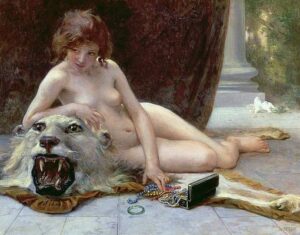 Question 2: Western works of Art depict and defined different roles for men and women by showcasing the inequality of power. Men are seen as superior and dominate, treating the opposite sex as if they were only there to satisfy their needs.  The significance of this is to display the differences in roles for example, John Berger uses Adam and Eve to show how different men and women are treated and what each role they play entails.  I do believe these depictions influences are society today because though individuals  voice against the objection of women, many media outlets still do this. We are used as outlets to sell your cars, to promote your meals, lingerie, and even weight loss solutions. Some men still feel entitled to our bodies based on what is seen from outer sources. Some still feel we belong in a kitchen instead of being CEO of a multi million dollar corporation.

Question 3:  Berger explains that the significance of the mirror in paintings depicting women as a symbol to show the women who they are and what people think they look like.  In the episode he mentions how a women’s gaze is  almost always the same in paintings as if to respond with a beckoning call to serve the man looking at her. Often during this time, European painters depicted a woman naked to reflect their sexual view of them and attract more with the same perception. The difference though between now and then is that women aren’t forced into being somebody object of sexual desire.

One thought on “Discussion Questions #3”