The example of  an image I encountered which attempt to convey a message regarding it is 3 wises Monkey . It was a paintings that displayed 3  same monkeys with different meaning .the first monkey has his hear closed  , the second one in the middle  has closed  his eyes and the third finally has his mouth closed too . This is kind of image that stand up with a message that people could interpret in different ways .first of all , standing in front of it  personally did not let me speechless or thoughtless. I had in my mind formulate a whole story of this image that convey me to change the way I was looking at the world . Questions  as why Shouldn’t I hear , see or talk matter ? What was the really meaning of the image ? Looking around  me , and analysing how some people got in trouble simply because they had said something that they shouldn’t have said  , heard what they shouldn’t hear or saw what they shouldn’t have seen I realise that the message, me the viewer ,who  was looking to  the image would have changed my thoughts .It does really convince me to try to stay away from nonsense-talk  , keep my eyes away from things that does mean to me and chosen well what I want to listen .After that I was really impress and inspired by the image I did the research on internet to figure out if the meaning that I gave to image was matching . I found it on internet in my phone which mean it was possible for me to see it on my screen .The same image with same meaning was on internet in different aspects of viewing . Some edited it in black and white , other in colour .I even saw somewhere that monkeys was clothed . The image come to us , we play with it do whatever we want with it .

That allowed me to take good decision by connecting those life still of living to stay away from trouble . It really effect they way I used to be .I was such a person who wanted to be in the epicentre of talking , hearing and seeing everything but I became more  focused  on things that really matter to me .But its it necessary to be convinced by  images ? Those images  or painting that we are seeing , is it not someone else ideas or  thoughts  , how will that relate to our own point of view ? 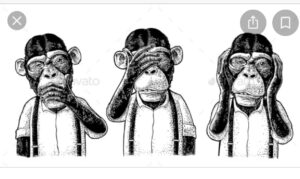 One thought on “Ways of seeing/Ways of hearing Blog #2”